Please join us for WSU Dairy Program Weekend In Pullman. All events will be held in the Ensminger Pavilion, 455 Lincoln Dr.

On Friday January 24 and Saturday the 25 the annual CUDS review will occur with selected industry reviewers.

On Friday night, January 24, the WSU Dairy Club will host their annual Dairy Club Banquet (including a silent auction) from 5:30 – 8:00 PM. Please RSVP to savannah.crnick@wsu.edu for banquet reservations, cash will be accepted at the door.

On Saturday January 25, a CUDS reunion will be held beginning at 3 PM and concluding at 8 PM. Reservations (https://www.brownpapertickets.com/event/3918480) are required for the catered meal.

Amber’s Top Ten Tips: What We Learned About Pest Birds On Washington Dairies 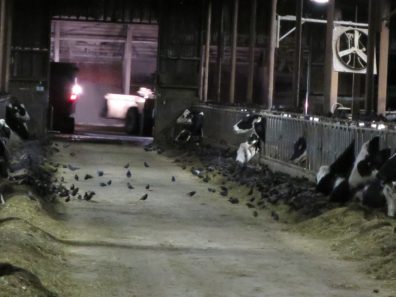 Winter is the season for colder temperatures, holiday celebrations, and pest bird problems. Dairy barns attract more pest birds during the colder weather because they offer a warm shelter with plentiful food. The influx of pest birds on dairies results in lost feed from bird depredation, feed spoilage, building depreciation, increased costs for bird deterrence, and potentially negative consequences on cow well-being. Our Pest Bird Management Research Team conducted a survey and on-farm study over the last year to gain insight on the “big picture” of pest bird damage on Washington dairies. Here is a list of 10 things we learned:

We sure learned a lot over the last year, but we only scratched the surface of the problem. Our next steps are to test some alternative bird deterrence methods to determine which methods may be more economically feasible and long-lasting. Please contact us if you have any questions or ideas on how we can help dairy farmers manage this problem.